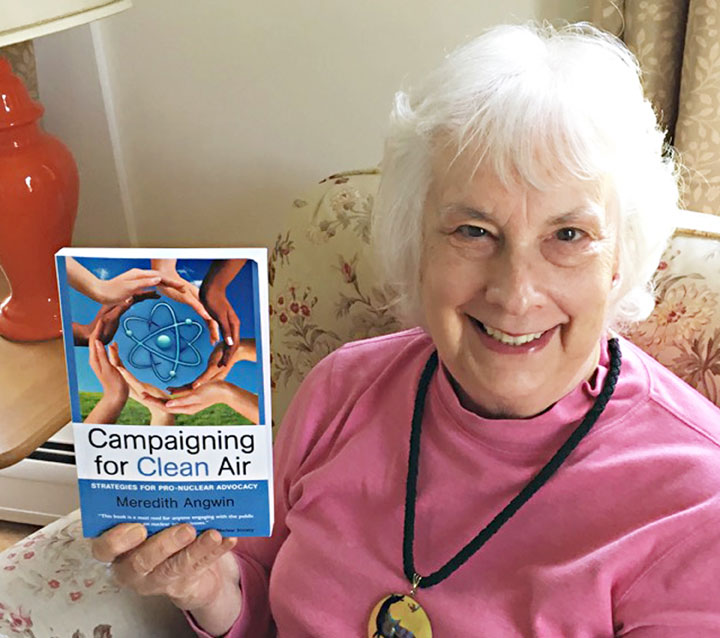 Writing a book is a great way for entrepreneurs, celebrities, speakers and others to increase their profiles. At least, that’s the way it’s supposed to work.

For pro-nuclear advocate Meredith Angwin, that’s exactly how it worked.

Meredith’s new book is called Campaigning for Clean Air: Strategies for Pro-Nuclear Advocacy. While Meredith is well-known and respected as an advocate for clean nuclear energy, she says, “Writing this book increased my prestige in the industry. Instead of just being a blogger, I am an author. Someone noted that ‘author’ and ‘authority’ have the same root. If you are the author, you are the authority.”

Honors and Praise for Meredith and Her Book

Since the book’s publication, Meredith has been invited to be on a panel at the American Nuclear Society annual meeting. “That kind of invitation did not happen before the book,” Meredith notes.

Another honor happened at a recent convention. The North American Young Generation in Nuclear (NAYGN) meeting is part of the annual Nuclear Energy Assembly, which was held in May 2017 in Scottsdale, AZ. The convention organizers contacted Meredith and arranged for a bulk order of her book. At the convention, every NAYGN participant received a copy of Campaigning for Clean Air in their welcome packet. “My book was only one part of the advocacy events at the meeting. But still, my book was there!” says Meredith with obvious pride.

She was also thrilled to have her book praised recently by prominent nuclear blogger Steve Aplin, who had the following to say about Meredith’s book:

“Meredith Angwin not only explains why anybody who is really worried about climate change and clean air should support nuclear energy, she tells how they should go about their own personal campaign. She is as relentless as Carville and Begala in laying out the importance of pursuing multiple venues of advocacy and never, ever, giving up.” (Link to full article)

Why Write a Book?

Meredith’s nuclear advocacy work includes writing, speaking at hearings, and organizing rallies. Meredith was a relentless and formidable campaigner for keeping Vermont’s only nuclear reactor running (Vermont Yankee closed in 2014). She received a President’s Citation award from the American Nuclear Society for her work. However, she wasn’t always an advocate. Her background is energy research: among her many accomplishments, Meredith was inventor on several patents in pollution control for fossil fuels and did extensive work in corrosion control for nuclear plants. In her retirement, she developed a skill set in advocacy.

“Many of the people who led the opposition to Vermont Yankee had activism training or even graduate degrees in advocacy,” reflects Meredith. “I knew the technology of nuclear energy very well, but I knew little about how to persuade people to support it.” As a result, Meredith learned how to write a good letter to the editor, how to handle herself in a debate, and much more. Other nuclear supporters started asking her for advice. After a number of people asked her the same questions, Meredith felt it was time to write a book containing strategies and advice for pro-nuclear advocacy.

With the fight for nuclear energy happening “right now,” Meredith felt she didn’t have time to wait for a mainstream publisher to pick up her book. “The entire process of working with a mainstream publisher is too long: writing the proposal, sending it to agents, getting rejections, sending to other agents, agents sending it to publishers etc. This can take years,” muses Meredith. In addition, her book is aimed at a niche market (and not a popular one at that). Meredith didn’t think publishers would be interested. Increasingly, authors of books in niche markets are turning to self-publishing to make sure their books reach an audience. “I also hoped I could make some money with a book and maybe some speaking engagements,” Meredith smiles. “I made no money with blogging.”

Thus, Meredith’s decision to self-publish her book was easy. A few years ago, she and husband George Angwin self-published a short book, Voices for Vermont Yankee. The book is a collection of statements local people had made in favor of Vermont Yankee at a Public Service Board meeting. “That book was a very positive experience and only took a few months. After that experience, we didn’t even think of contacting a ‘regular’ publisher for Campaigning for Clean Air. We saw that route as too uncertain and too time-consuming.”

The Importance of Not Looking Self-published

Meredith wrote a solid book and obtained great endorsements.  Still, she knew her book would be compared with anti-nuclear books that are published by big publishing houses. As such, her book could not look self-published; it had to look mainstream or better. That’s where 1106 Design came in with editing, proofreading, indexing, cover and interior design, a new logo, a website, and postcards. “Many self-published books look amateurish. Due to 1106 Design, my book looks professional. It can stand next to any big-publisher book and hold its own. That matters to me and to my readers. In the energy field, an amateurish-looking book lacks credibility,” says Meredith.

Meredith also enjoys using the postcard that 1106 Design made for the book. “A postcard advertising a book is an amazing thing…so much better than a business card!” states Meredith. “A postcard opens a conversation.”

Reflecting on her self-publishing journey, Meredith says, “I needed a lot of hand holding because I didn’t trust my judgment on various issues and I was also kind of picky about some aspects of the book. The 1106 Design people were great, and they were always there for me. It is a beautiful, well-edited book, and having a book out there has been a very pleasant experience. I am grateful to 1106 Design.”

We wish Meredith continued success with Campaigning for Clean Air: Strategies for Pro-Nuclear Advocacy and can’t wait to hear what the future has in store for her!